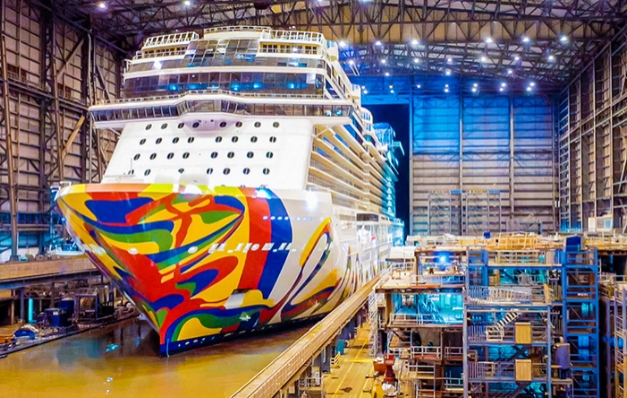 January 2020 - The Norwegian Encore, one of the largest cruise vessels in the world, is the seventeenth in the Norwegian Cruise Line (NCL) fleet. The sister vessel of the Norwegian Escape, Norwegian Joy and Norwegian Bliss is the fourth and final vessel in the Breakaway Plus class. The colourful and abstract painting on the bows by the Spanish artist Eduardo Arranz-Bravo makes the Norwegian Encore easily recognisable.

De Boer Staal supplied bulb flats in Grades A, AH36 and DH36 for the construction of the Norwegian Encore and applied the two-component shop primer Sigmaweld in-house to some of the bulb flats. Weep holes were also made in the flats, and fusion edges and bevels were applied. The profiles were then aligned and placed in the relevant section. It goes without saying that the bulb flats and the steel treatment operations comply with the shipyard's stringent quality standards. In addition, all the flats were delivered according to the shipyard's requirements to ensure that the entire construction process was completed efficiently and smoothly.

Leisure activities for all ages

The Norwegian Encore has a first: the largest ocean-going electric go-kart racing circuit. The circuit is 350 metres long and it crosses two floors. It includes ten exciting bends and four points located up to four metres above the sea. There is a Galaxy Pavilion alongside the circuit: a 900 m2 indoor virtual reality space with interactive games. And, of course, there is an Aqua Park with two two-storey-high water slides, one of which extends more than three metres outside the edge of the vessel, looping to the deck below.

Are you looking for bulb flats or complete shipbuilding packages?

Are you looking for sheet steel and profiles in shipbuilding quality? Coated with an MC primer? Cut to size and shaped? Don't hesitate to get in touch!