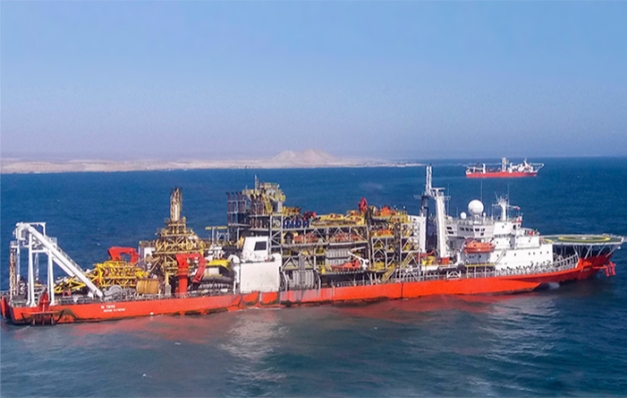 Diamonds are for ever…

July 2021 - To carry out a number of modifications to the mining vessel Ya Toivo, De Boer Staal cut sheet steel and bulb flats in Grade A with 3.2 certificates from Lloyds and DNV and also supplied two seamless pipes.

The pipes and the custom-cut steel parts, in total approximately 35 tons, were blasted in De Boer Staal's own coating line and provided with a two-component shop primer that meets the requirements of IMO PSPC: International Maritime Organization Performance Standard for Protective Coatings.

The former HMS Challenger was built in Scotland in 1981 and commissioned by the British Royal Navy in 1984 as a support vessel for deep-sea diving operations and nuclear-powered submarines. Due to budget cuts, the ship was sold in 1993.

Although the vessel was to be converted for work in the Baltic and North Atlantic, it was still at a standstill in 1996. In 1999 the vessel was sold to IMDH Group and converted in Poland into a mining vessel for the extraction of diamonds in the seabed off the  West African coast.

In December 2000, the first diamond mining took place: from the ship they lower a 280 Ton ROV (Remote Operated Vehicle) to the seabed, which loosen the sea bed soils till  rock level and sucks up the grit. The vacuumed material is pumped via a hose to the ship mineral processing plant where the diamonds are removed. The ship is named after Andimba Toivo ya Toivo, the Namibian anti-apartheid activist, political prisoner and politician.

Bulb flats and steel made to measure for South Africa

The sheet steel and bulb flats, as well as two seamless pipes with steel coating, cut to size by De Boer Staal, were delivered extremely quickly. This extensive and laborious assignment was carried out urgently and shipped to South Africa where the modifications to Ya Toivo Mining system are carried out.

The freight was provided by partner Yordex with the assistance of an external lashing company, which assisted with the sea-tight loading of the container. The cargo in the container is secured and fully timbered so that it cannot slide.

"We can look back on a great assignment with a short lead time!"

The customer chose Boer Staal because De Boer Staal made a complete offer with a competitive price and could guarantee a fast delivery time, including the correct export documents, lashing (making sea-proof) and traceability (document flow linked to the numbers in the profiles to origin and quality).

By clicking on Accept, you give us consent to place social media and marketing cookies. Go to Cookie settings to make your own selection of the cookies that will be placed. You can always adjust your preferences. For more information, read our cookie policy.