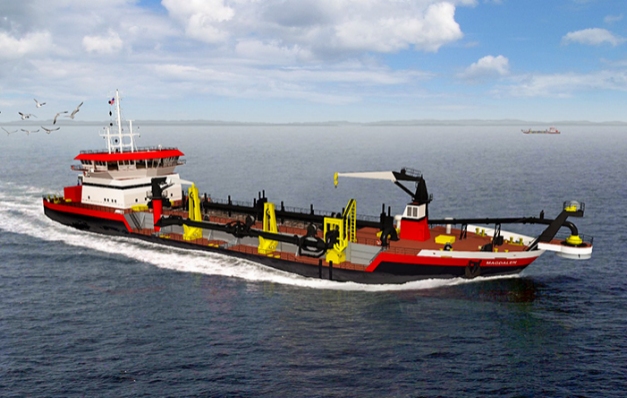 December 2020 - In August, Eastern Shipbuilding Group in Panama City, Florida, started on the construction of the second trailing suction hopper dredger for Weeks Marine Inc. The R.B. Weeks, named after co-founder Richard B. Weeks, is the sister ship of the Magdalen, which went into service in 2017.

Weeks Marine Inc. owns and runs a fleet of dredgers that execute the most complex and demanding dredging projects. This new 6,540 m3 trailing suction hopper dredger with a length of 110 metres will be used for sand nourishment operations and dredging projects, and it is highly automated.

Like the Magdalen, the R.B. Weeks will be built to a design by Royal IHC, which will also provide engineering and hardware such as the complete and highly efficient dredging plant, dredging automation systems and instrumentation. The vessel also be fitted out with a unique dynamic positioning and tracking system.

De Boer Staal supplied Grade A bulb flats for the construction of the R.B. Weeks. The bulb flats, ranging from 140x8 to 340x12 with 3.2 certificates from Lloyds and DNV, were delivered directly to the shipyard in Florida.

In collaboration with ILS (International Lashing Service) from Rotterdam, the materials were lashed on special flat racks at the De Boer Staal location for safe transport by sea.

Eastern Shipbuilding Group opted for bulb flats from De Boer Staal because De Boer Staal submitted a complete tender for a competitive price. De Boer Staal was also able to guarantee the fast delivery of the bulb flats, including the correct export documents, lashing and traceability (document flow linked to the numbers in the flats to guarantee origin and quality). That was the deciding factor in the decision to go with De Boer Staal.

Completion of the R.B. Weeks is scheduled for early 2023.

By clicking on Accept, you give us consent to place social media and marketing cookies. Go to Cookie settings to make your own selection of the cookies that will be placed. You can always adjust your preferences. For more information, read our cookie policy.